Women in the COVID-19 Economy 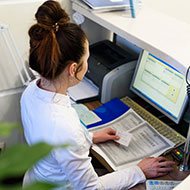 Imagine a typical workday, pre pandemic. Think about your coworkers. How many of them are women? The receptionist you greet each morning. The woman with the office next to you. Maybe your boss or your bosses’ boss. Then think about the other women you see during the workday. The teacher at your child’s school, the manager of the café where you get your morning coffee, an important client, the bartender at happy hour. Now image that more than a quarter of those women leave the workforce and don’t return. This is the future many economists predict.

Nationally, the impact of the COVID-19 economic crisis has been particularly devastating for women. Between February and November of last year, the national labor force participation rate for prime working age adults fell by 1.8 percent. (Table 1) That may not seem like a lot, but in the national workforce it represents nearly three million workers.

Initially, the change in participation for men and women was similar. By late summer, the gap was widening. In September alone, more than 600,000 women left the labor force.

Who were those women and why did they leave?

The current recession is K shaped. Middle- and upper-class white-collar professionals who can work from home have done relatively well. Job losses have been small. And many are benefiting from economic stimulus policies, including record low interest rates. Women without bachelor’s degrees were significantly more likely to drop out of the labor force. The rates were even higher for women without bachelor’s degree who are raising young children. (Table 2) Another significant factor is race. The February to September decline in the participation rate among Black women with kids is larger than for any other demographic group. Their participation rate dropped 6.4 percentage points. For Black women, this is a much larger decline than in the Great Recession. (Table 3) This is particularly disheartening, as this group had some of the largest employment gains from 2015 to 2019, when the strong labor market pulled in new or previously discouraged workers.

Why are so many women, particularly low income and nonwhite women leaving the workforce?

The impact of the economic crisis on women can be explained by three interconnected issues: caregiving responsibilities, occupational segregation, and the disproportionate impact of a pandemic related recession on certain industries. Many industries continue to be either male or female dominated. Workers in healthcare and education, for example, are much more likely to be women than workers in construction or manufacturing. Forty five percent of workers in Portland Metro work in industries with moderate to severe segregation by sex. (Table 4) Compared to their presence in the labor force, women are overrepresented in the industries hardest hit by the current economic crisis, Accommodation and Food Service, Government, and Arts, Entertainment, and Recreation. When jobs are lost in sectors where more women are employed, more women will lose their jobs.

The second reason is occupational risk. The risk of contracting COVID varies greatly by occupation. (Table 5) Women are more likely to work in occupations with high risk of COVID exposure.

The third piece is caregiving. Decades of research show that women continue to shoulder more caregiving responsibilities, complicating their ability to maintain full time employment. Surveys of two parent, dual income households indicate women are devoting more time to caregiving, including childcare, and supporting online education, and are more likely to reduce their hours or drop out of the labor force than men. There are a few ways this comes into play.

The first is childcare. It is not a coincidence that the labor force participation rate for women fell dramatically at the start of the school year. (Table 6) Currently, Multnomah and Washington Counties do not meet the criteria for opening. The counties’ fifteen public school districts, including the largest Portland Public Schools and Beaverton Public Schools, did not offer in person school during the fall or winter. Decisions have not yet been made for the spring term. This impacts roughly 200,000 children and teenagers, including nearly 100,000 elementary school students. Someone had to organize and oversee their education and provide childcare. There is every indication that much of that work fell to women. Many childcare centers for young children are open for in person care. Due to COVID restrictions, centers are limited the number of available spaces. Many childcare centers have closed. Even before the pandemic nearly every county is Oregon was identified as a childcare desert.

The second involves risk and caregiving. Women who face greater risk of COVID transmission at work and have caregiving responsibilities for children or other family members are leaving the workforce.

With vaccine distribution underway there is hope that the economy can return to pre pandemic levels. However, the slow recovery from the Great Recession tells us that declines in participation rates, particularly for vulnerable demographic groups, can take years to fully recover, and they hinder overall economic growth.