The Impact of the COVID-19 Economic Crisis on Young Workers 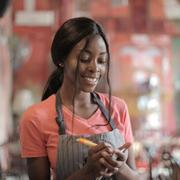 The current crisis has been swifter and more devastating to the labor force than the great recession. In December 2007, employment in Portland Metro reached a pre-recession peak of 719,100. At its low point in January 2010, employment was 649,900, a decrease of 9.6 percent. During the first six weeks of the current economic crisis, employment decreased from 831,700 in March 2020 to 746,700, a decrease of 10.2 percent. In one month, employment decreased more than it did during the more than two years during the great recession.[1] (Figure 1)

Since the start of the COVID-19 economic crisis, 195,644 workers in Portland Metro filed initial unemployment claims. (OED) This represents 40 percent of initial claims statewide. Prior to the start of crisis, weekly claims averaged between 890 and 1,269. Initial claims peaked during the first week in April (18,669). (Figure 2)

To look at it another way, in 2019, there were roughly 854,000 jobs in Portland Metro. Roughly 23 percent of workers filed initial UI claims within the past four months.

Jobs losses were unevenly distributed across industries. The industry hardest hit was Accommodations and Food Service. To date, that sector has lost the highest number of jobs, more than 41,500 in Portland Metro, representing 53% of the 2019 labor force. It is important to note that this does not include undocumented immigrants and other workers who are ineligible for UI claims. The loses are undoubtedly higher than what we see in the data.  (Figure 3)

Other industries that have suffered large losses include Health Care and Social Assistance, Arts, Entertainment, and Recreation, and Retail Trade. Occupations in these sectors tend to be low-wage and require lower levels of educational attainment. Younger workers and workers of color are overrepresented in these industries. (OED; EMSI)

Who is filing for unemployment?

What do we know about the workers who are filing for unemployment benefits? In short, not nearly as much as we could.

The data about race is also incomplete. Twenty percent of workers (115,976) did not indicate their race.  For context, fewer than 49,590 workers identified as people of color. (Figure 5)

Data about the ethnicity of initial claim filers shows that they are slightly underrepresented compared to their representation in the labor force (11% v. 12%). It this is accurate; it does not follow national trends.

The current economic crisis is disproportionately impacting young adults. Workers, age 16 to 24 and 25 to 34 are more likely to work in industries that have suffered large loses, more likely to lose their jobs, and more likely to remain on unemployment[2]

Young workers are among the first to lose their jobs during periods of economic contraction. The systematic setbacks, including loss of work experience and wage growth, can have long-term effects on their careers.

The circumstances of this crisis and the social distancing used to address the underlying pandemic are more likely to impact young adults because they disproportionately impact sectors with younger workforces, including Accommodations and Food Service, Arts, Entertainment and Recreation, and Retail.

Effects of entering the labor market during a recession

Data from past recession show that entering the workforce during a recession has long term consequences for workers. These workers face higher and more persistent poverty rates, longer period of unemployment, and lower lifetime earnings. The effects are most severe for people of color and those without a high school diploma.

The workers who will be most impacted

Before the recession there were more than 387,000 low-wage workers in the regional economy. A disproportionate share are young adults ages 18 to 24. These workers can be broken into three clusters.[6]

Due to their educational attainment and tenure in the labor force, this group was already at the bottom of the wage spectrum. Massive layoffs and furloughs in retail, hospitality, and entertainment have already hurt this group.

Two-thirds of this group report high school diploma is their highest level of education. The rest have attended college or training but did not earn a degree. While some may have completed a nondegree credential, the majority did not and are thus unlikely to see an economic payoff for their time spent in school and are more likely to default on student loans.

During the Great Recession, this group likely increased. People who were in school stayed there. Others went back to school for retraining or to further their education. The current recession, however, is different. Students are reluctant to return to college campuses. In addition to concerns about the spread of COVID-19, many families are reassessing the value of the college experience. The economy is changing rapidly, and many people are hesitant to invest in education or retraining when they are unsure about the future.

This group is potentially best positioned to weather the recession. Education is positively correlated to increased earnings. Although despite having associate degrees, this group is still in the low wage category. There is a mismatch between the occupations in which this group works and their educational attainment. Of the ten most common occupations, just three require a post-secondary credential and none require an associate degree.

Even before the start of the economic crisis, these groups of young adult workers were in a vulnerable economic position. The sectors they work in have been hard hit by the crisis. These sectors, retail, food service, arts and entertainment, have traditionally been entry points into the labor force. Requiring low levels of educational attainment, training, and experience, they allow workers to gain experience at the start of their careers. Now, though, many of these jobs are going away. Perhaps permanently. The long-term trends of declining labor force participation and high levels of unemployment for young adults are intensifying, just as they did during the great recession. Combined with what we know about the long-term effects of entering the labor force during a recession, we can safely say that this group of workers is going to face significant challenges moving forward.