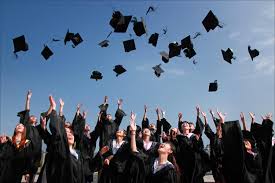 Regional Census data shows that many young workers with associate degrees are working in low wage occupations for which as associate degree is not required. (See Impact of COVID-19 on Young Adults Workers) To better understand the slow growth rate in the percentage of adults with an associate degree and the career opportunities for those who do have one, we looked at the degrees awarded during the past five years.

Between 2015 and 2019, more than forty-two thousand associate degrees were awarded in Clackamas, Multnomah, and Washington Counties in Oregon and Clark County, WA.

The degrees were issued by eighteen schools. The four schools to award the most degrees, Portland Community College (42,749), Clark College (18,240), Mt Hood Community College (7,076), and Clackamas Community College (3,948) are part of the public community college system. Together, they accounted for ninety-one percent of all degrees awarded. Of the remaining fourteen schools, two (Birthway College of Midwifery and Warner Pacific College) are non-profit. Four of the schools have closed: The Art Institute of Portland, Le Cordon Bleu College of Culinary Arts, ITT Technical Institute, and Everest College. (Table 1)

Demand and salary for largest occupations

The two instructional programs for which the largest number of degrees were awarded between 2015 and 2019 are not closely tied to a specific career. Between 2015 and 2019, more than eight thousand associate degrees in General Studies were awarded in the four-county region. During that same period, there were zero jobs openings in the region that specifically required a degree in General Studies. General Studies can be a good fit for students who plan to spend two years in a community college and then transfer to a four-year college or university. It can be harder for students to translate this degree to a career.

The instructional program for which the largest number of associate degrees awarded between 2015 and 2019, Liberal Arts and Sciences/Liberal Studies is not a professional degree. However, it is in higher demand than General Studies. Between 2015 and 2019, there were more than eleven thousand jobs requiring this degree in the four-county region. During that same period, however, more than fifteen thousand degrees were awarded. In 2019, for example, there were just under twelve hundred job openings and more than thirty-two hundred degrees awarded. (Table 3)